The State of Michigan is blessed with the riches of unspoiled nature: the nation's longest freshwater coastline, lakes that feel like oceans, golden beaches, an abundance of fresh produce straight from the farm, glorious sunrises and sunsets and endless opportunities for recreation.

America's Great Comeback City, Detroit, celebrates its automotive heritage throughout the Motor Cities National Heritage Area and celebrates its music roots at the Motown Museum. It is home to the world famous Henry Ford Museum, America's "Greatest History Attraction" and a thriving arts and culinary scene.

Lakes, campgrounds, wildlife refuges and 103 Michigan state parks and recreation areas create a wide variety of recreational pursuits. Rivers for water sports, and thousands of miles of hiking, biking, snowshoeing, cross country skiing and snowmobiling trails thread their way though 19 million acres of forests. Spend a day casting your line in one of the world's greatest freshwater fisheries or experience the thrill of the hunt in one 111 managed wildlife areas statewide.

Hundreds of islands dot Michigan waters. Isle Royale National Park is a remote wilderness retreat in Lake Superior where wolves and moose roam free. Mackinac Island, located in the Straits of Mackinac, is a lush 19th-century resort community fixed firmly in the Victorian era, a car-free island dominated by an 18th-century fort and the more than a century-old Grand Hotel, America's largest summer resort hotel.

The Upper Peninsula, which is 90 percent forested, retains its aura of accessible wilderness. Vast wildlife and waterfowl refuges, 150 waterfalls, iron and copper mines and the Soo Locks (where ocean-going freighters make the 21-foot leap from Lake Superior to Lake Huron) are within an easy drive of one another.

25,000 mornings, give or take is all we humans get, make sure some of them are Pure Michigan.

Working on a class project? 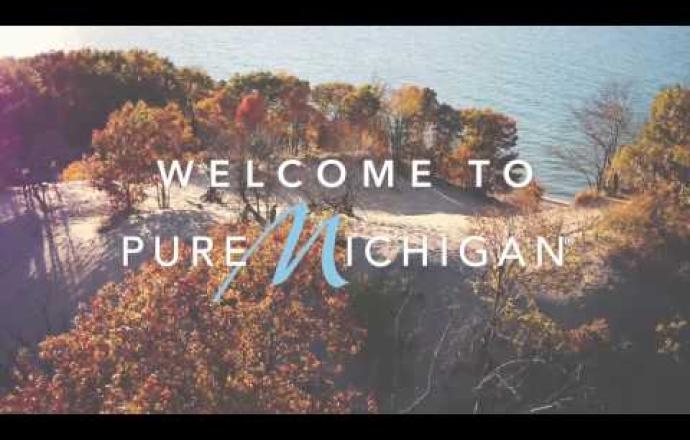 This is a state imbued with the riches of unspoiled nature and endless adventures. Offering a near infinite array of memory-making moments that are cherished long after we've returned home, it's what we call "Pure Michigan".

Up Next:
Welcome to Pure Michigan

This is a state imbued with the riches of unspoiled nature and endless adventures. Offering a near infinite array of memory-making moments that are cherished long after we've returned home, it's what we call "Pure Michigan".