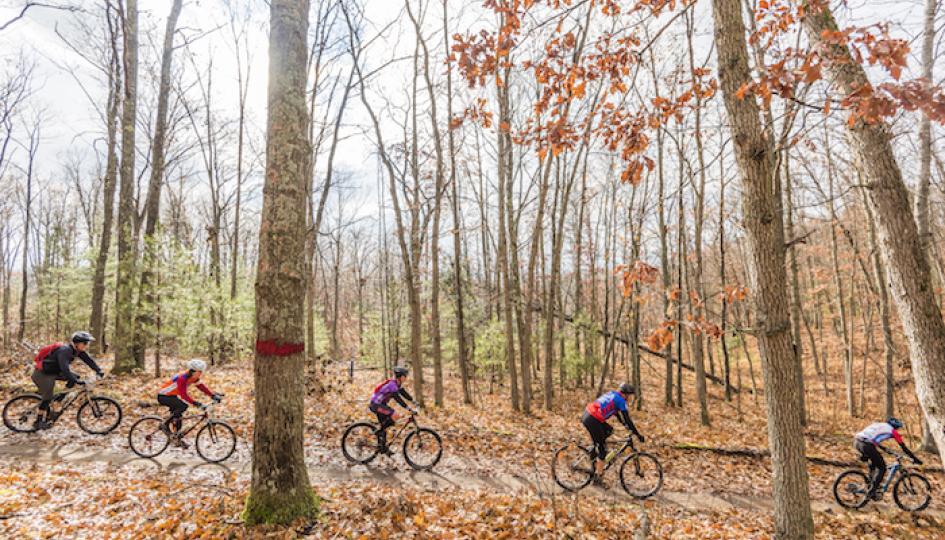 Of the million-and-one reasons to visit the Grand Traverse Area, mountain biking is quickly becoming a more popular excuse to head up north and get a little dirty. The region attracts cyclists from all over the country -- including those who prefer paved trails or the scenic roads of the Leelanau and Old Mission Peninsulas – but it’s also home to some of the best trails in the state, and some of the biggest events around.

Every November, thousands of cyclists converge on Traverse City to compete in the 29-mile Iceman Cometh Challenge, the largest one-day point-to-point mountain bike race in the country. Mountain biking is a big draw in the hills and valleys around Traverse City in almost every season of the year. With the help of cyclist Cody Sovis, we’ve curated a list of some the best biking trails in the Grand Traverse Area.

A popular cross-town route for cyclists, in-line skaters, walkers and joggers, this 10.5-mile-long long, paved, non-motorized trail runs east and west through Traverse City and into Leelanau County (on the Leelanau Trail section). The trail goes through Downtown and runs along Grand Traverse Bay. It is easily accessible at many points and you can find bike and in-line skate rentals at several area bike shops. Stop for a bite to eat along the trail at a number of restaurants and attractions located along the trail.

The Village at Grand Traverse Commons is home to a great network of trails. Riders have been climbing to the top of the hill for years, but the recent rise in mountain biking enthusiasm means there’s seldom a time you’ll go on the trails and not see a few other cyclists. It’s a short loop punctuated by steep, testing ascents with rewarding views of West Bay and screaming-fast descents back to the Village, where a host of coffee shops, bakeries, and other shops serve as a great place to refuel after the ride.

One of the most popular trail networks in the area among bikers and runners is the Vasa Pathway. In winter it’s home to the world-class North American Vasa ski race and gets the professional grooming treatment for ski and fat tire bike use as long as the snow sticks around. During the rest of the year, it’s usually peppered with riders out hitting famous landmarks like Anita’s Hill, the Wall and the Power Section. The terrain is open and rolling, with pockets of sand adding to the challenge of steep hills, fast descents and fast sections that test the legs and lungs. The Vasa Pathway also serves as the final kilometers of the Iceman Cometh Challenge, the largest single-day mountain bike race in North America. The pathway also includes single-track and two-track routes.

Located in Bellaire, this brand-new system of professionally maintained trails has gotten rave reviews from beginners and experts alike. It’s a terrific blend of hills, flat and fast sections and beautiful views – and it certainly doesn’t hurt that it’s located just a mile or two from one of Michigan’s finest breweries, Short’s Brewery.

This 6.4-mile trail loop is comprised of a relatively flat course that follows part of the Lake Dubonnet shoreline. Originally constructed as a nature trail, Lost Lake is regarded as a single-track by mountain bikers, though the path is wide. Lost Lake Pathway is a popular trail for beginner mountain bike riders and families.

This scenic 3-mile-long trail is located on the picturesque property of 45 North Vineyard. The trails is open year-round and is free to use during business hours for biking, hiking and cross-country skiing. The trail starts near the tasting room and wanders through the lower vineyard before starting uphill toward the top vineyard where you’ll be rewarded with views of the entire property and surrounding rolling hills. Then it winds down through a wooded portion before returning back to the tasting room.

About the Author: Cycling connoisseur Cody Sovis works at Einstein Cycles in Traverse City and maintains a cycling blog year-round. 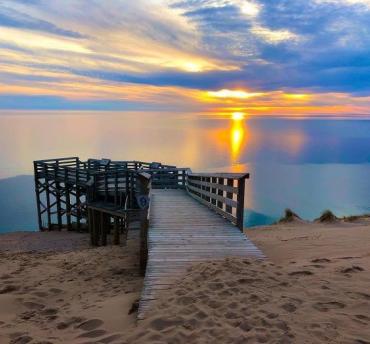 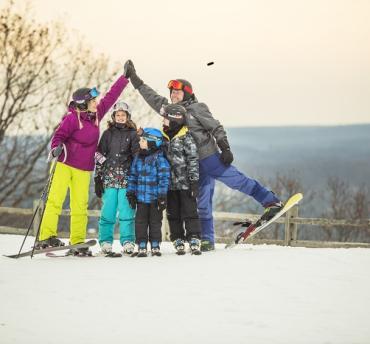