Every day is Thanksgiving at Turkeyville U.S.A.

For the past half-century, the Cornwell family has served up home-cooked turkey dinners with all the trimmings and the “world’s best turkey sandwiches” to hundreds of thousands of guests who visit their 400-acre farm and sprawling restaurant complex, just north of Marshall.

Their homemade fruit- and cream-filled pies have attracted admirers around the country ─ even in the Oval Office.

President Carter dropped in years ago to sample some of the Cornwells’ famous country-style cooking and left an appreciative note scrawled on his paper napkin: “Thank you for the great pie.” First lady Barbara Bush stopped by Turkeyville frequently during campaign swings through Michigan to pick up the restaurant’s signature peanut-butter chiffon pie, a perennial favorite of her husband, President George H.W. Bush.

This past spring, the Cornwells celebrated Turkeyville U.S.A.’s 50 years as an American icon with a nostalgic friends-and-family gathering to honor its founders, Grandpa Wayne and Grandma Marjorie Cornwell.

Beginning in 1943, the couple ran a thriving turkey retail and wholesale business for two decades and sold turkey sandwiches at a booth at the Calhoun County Fair each August for 11 years. In 1968, after word of Grandma’s savory turkey delights spread, they opened a one-room eatery with two barstools in the turkey pot pie processing building behind their white centennial farmhouse.

Grandpa and Grandma Cornwell took their idea one step further and declared their original 180-acre farm and dining enterprise a “village.” They called it Turkeyville U.S.A., and Grandpa Wayne promptly proclaimed himself mayor.

“This is still a family-run operation built on the business my grandfather started,” says Wayne’s grandson, Blain Cornwell, whose tanned face and strong handshake reflect a lifetime of farm labor. “It’s the only place I’ve ever worked.” 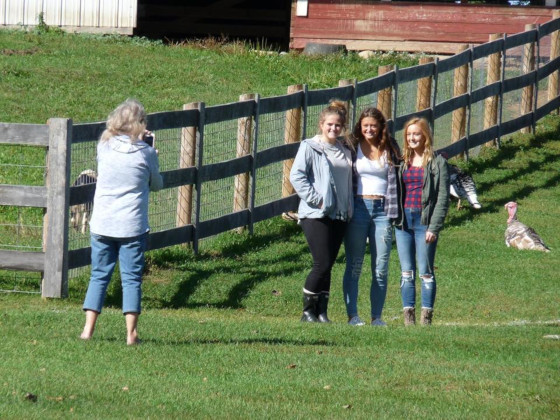 On a sunny fall day when the Michigan woodlands are cloaked with kaleidoscopic autumn colors, Doug and I head north from the city of Marshall until we spot a sign on the roadway reading: “Turkeyville Village Limit.” It’s just noon, but the parking lot is already filling up. Bright orange pumpkins from the farm’s patch line the walkways, and dried corn stalks adorn the covered outdoor patio of Turkeyville’s brown farmhouse-style dining complex. The peaked roof displays the name “Cornwell’s” in orange lettering with an image of a plump turkey.

Inside the restaurant, the tantalizing aroma of hot apple and pumpkin pie wafts through the air. Behind the deli-style food counter, ladies in black farm aprons hand heaping plates of turkey and mashed potatoes, turkey pot pies and turkey sandwiches to waiting guests. Suddenly, we realize we’re famished.

Blain’s wife, Patti, looking trim and fit in a red-and-white checkered shirt and blue jeans, fills us in on a bit of Turkeyville lore. Born and raised a “city girl,” she has never forgotten their first date as teenagers. Blain was responsible for raising 12,000 turkeys back then and insisted on taking her by tractor into the field to scatter feed for the birds before they left. “Turkeys are very curious, and I was scared to death they would bite me,” Patti remembers.

To commemorate the 50th anniversary, she has compiled Marjorie Cornwell’s original recipes into a 2018 cookbook, sold in the Country Junction gift shop. “All of our recipes are Grandma Marjorie’s, and everything is made from scratch, just like it was 50 years ago,” Patti tells us. “We have been offering gluten-free and dairy-free items on our menu for decades.”

She leads us down a hallway where she has created a visual timeline with 50 years of Cornwell family photos and memorabilia.

“Grandpa Cornwell was a real character and a true entrepreneur,” Patti says. “He had great ideas. His son, Alan, and grandson, Blain, have continued that family tradition.” Patti and Blain’s daughter, Elyse, a fourth-generation Cornwell, now helps out in the restaurant. 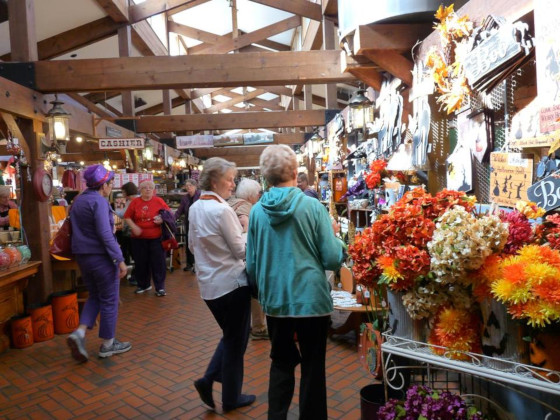 A great deal has changed at Turkeyville U.S.A. over the past five decades. The original small eatery has been expanded into a 200-seat dining room decorated with dark wooden beams, antique furnishings, and farmhouse collectibles. In the adjoining 180-seat Dinner Theatre, visitors can enjoy turkey-buffet meals and professional Broadway-style musicals and comedy shows.

Expansion during the 1970s and 1980s added an ice cream parlor featuring homemade flavors such as Turkey Trax, a bakery famed for its cream-cheese-filled pumpkin rolls and a gift shop brimming with Thanksgiving decorations, kitchen gadgetry, old-fashioned hard candies, and Turkeyville souvenirs. The old granary now houses a trendy gift and apparel boutique. In 2011, the Cornwells opened Camp Turkeyville, a 127-site, full-service RV resort offering families a farm-themed vacation experience in the mid-Michigan countryside from April through October.

Turkeyville also has built its reputation as a family-entertainment destination. Year-round events attract 250,000 visitors who gobble up 30,000 turkey dinners annually.

On weekends, regional artisans, craftsmen, and antique dealers set up display tables on the front lawn for arts and craft fairs, flea markets, and antique shows. In the spring, Civil War enthusiasts erect authentic encampments and stage re-enactments of the “Battle for Turkeyville.” Every July, farmers from the Midwest and beyond bring 600 vintage farm vehicles for the annual Antique Tractor and Machinery Show. On Saturdays and Sundays, kids clamber aboard a miniature railroad train, operated by the Mid-Michigan Railroad Club, for a ride on a 2½-mile track on the farm grounds.

What hasn’t changed at Turkeyville over the last 50 years is the warm family hospitality — and the delicious farm-to-table home-cooked meals.

Unable to stave off our hunger pains any longer, we leave Patti and head back to the restaurant to order a late lunch of hot turkey biscuit and a “Sloppy Tom” barbecued-turkey sandwich. The meal more than fulfills Turkeyville’s promise of stick-to-the-ribs turkey goodness. To top it off, we split a piece of presidential-pleasing peanut-butter chiffon pie. It’s a little slice of food heaven in a pastry crust. We’re stuffed.

To work off the calories, we cut through the ice cream parlor, stopping to sample some tasty pumpkin fudge, and step out into the bright sunlight. A short walk across the grassy farmyard takes us to the turkey barn, where two dozen iridescent-plumed birds are strutting their stuff. These prima donnas are just “eye candy,” however. The 20,000 white domestic turkeys — tipping the scales at 35 pounds each — that end up in the restaurant’s bank of ovens each year are raised exclusively for Turkeyville elsewhere on another Michigan farm.

Before departing, we fortify ourselves with tasty mementos of our visit: two frozen turkey pot pies and two hefty dessert pies, a coconut-cream and a rhubarb.

In the future, the Cornwells plan to add attractions at Turkeyville U.S.A. while maintaining its old-fashioned countryside charm. “We’re a close-knit family and we’ll be here for generations to come,” Patti says.

Inspire Your Creativity at These Michigan Craft Shows
×