Come face to face with America’s innovation and history at the Henry Ford Museum of American Innovation. 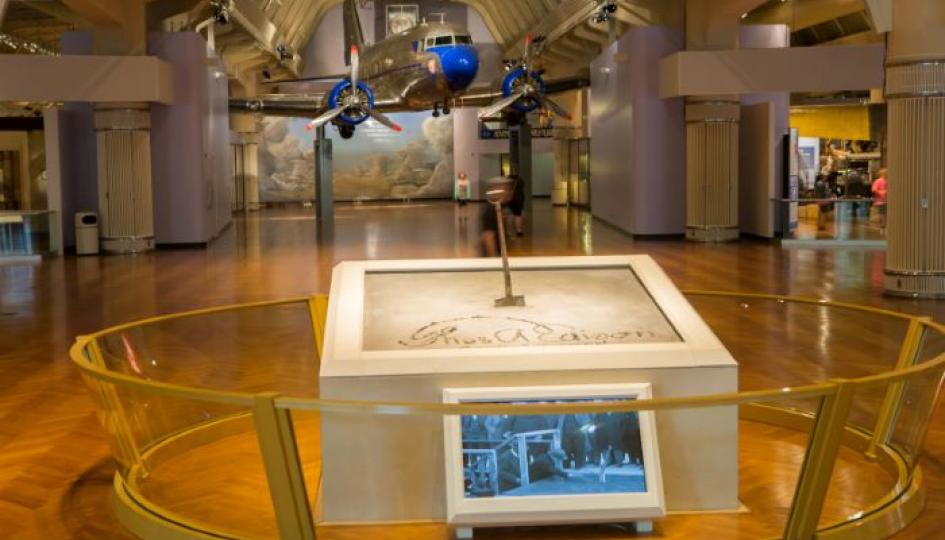 As a wealthy entrepreneur, Henry Ford began collecting bits of American history and technology: McGuffey Readers, interesting clocks and watches, innovative machinery, even his childhood home, schoolhouse and an 1836 stagecoach where he and Clara attended dances as youngsters. By the 1920s Ford’s collection had amassed to become the world’s foremost display of Americana: the Henry Ford Museum of American Innovation.

The Henry Ford Museum of American Innovation recounts the story of American innovation and history across 250 acres, over 300 years and with the aid of 26 million artifacts, some of the buildings that were physically moved from their original locations in Ohio, Georgia and even Switzerland. Four unique attractions comprise The Henry Ford: the Henry Ford Museum of American Innovation, a repository of artifacts from 19th-century household items to JFK’s presidential limo; Greenfield Village, with a collection of historic buildings such as the Wright Brothers’ Cycle Shop; the Ford Rouge Factory Tour and the Giant Screen Experience theatre.

View a parade of historic automobiles, from the 1865 Roper, the first American-made car, to Henry Ford’s first gasoline-powered vehicle, mid-century muscle cars and a 2002 Prius. The exhibit offers a look at the evolution of cars over the years. It also shines a spotlight on related innovations in American culture. See an original drive-in movie theatre marquee, a classic McDonald’s drive-through sign and historic road maps and travel guides.

On December 1, 1955, a tired, soft-spoken African American seamstress made history by simply refusing to give up her seat to a white man on a Montgomery, Alabama bus. Visitors to the Henry Ford can climb aboard Rosa Parks’ bus and relive a pivotal moment in the American Civil Rights movement. The bus belongs to the With Liberty and Justice for All exhibit that also includes the chair in which Abraham Lincoln was assassinated, George Washington’s camp bed and political memorabilia for and against women’s suffrage.

President John F. Kennedy was assassinated in this 1961 Lincoln Continental on November 22, 1963, in Dallas. The unarmored limousine was returned to Washington, reinforced with titanium and painted black before returning to service in Washington until 1977. JFK’s limo is part of a line-up of Presidential Vehicles that includes automobiles used by Franklin Roosevelt, Dwight Eisenhower and Ronald Reagan.

Designed by visionary architect Buckminster Fuller in 1946 to be a lightweight, transportable housing option, the shiny aluminum Dymaxion House on display represents the only prototype still in existence. A circular shape, revolving closets and built-in kitchen appliances made efficient use of the house’s minimal space.

In May 1926, Richard Byrd and co-pilot Floyd Bennett became the first to fly over the North Pole in this plane named after expedition sponsor Edsel Ford’s daughter. The Byrd plane is part of the Henry Ford’s Heroes of the Sky exhibit, which also features a 1928 Ford 4-AT-B in which Byrd became the first to fly over the South Pole; an early 1939 Sikorski helicopter; and a recreated 1903 Wright Flyer.

Take a spin through Henry Ford’s recreated village in a vintage Model T. Just steps away from the Model T loading dock sits the 1861 Ford Home, transplanted from its original location and the first of the Greenfield Village buildings. Model T rides and the Ford Home are part of Henry Ford’s Model T historic district, which also includes the Bagley Avenue Workshop where Ford built his first car.

Henry Ford’s longtime friend Thomas Edison enjoys a prominent place in Greenfield Village, most notably in the Menlo Park Complex where Edison invented the lightbulb, the telephone and various sound and recording devices. Buildings in the complex include Edison’s laboratory; the glass house where he crafted test tubes and lightbulbs; the machine shop where Edison built prototypes; even the Fort Meyers, Florida laboratory where the inventor spent his winters.

Set in the heart of Greenfield Village’s Main Street district, the Wright Cycle Shop provided income for the brothers’ experiments in flight. The Dayton transplant also served as a laboratory for the successful 1903 Wright Flyer. Other buildings nearby include the Wright brothers’ home; the Heinz House, where the condiment master perfected his recipes; a 19th-century general store; and the Logan County, Illinois, courthouse where a young Abraham Lincoln tried cases.

The great American poet Robert Frost lived and wrote in this white clapboard home in the 1920s. Part of the Porches and Parlors district, the house sits among other noteworthy residences including that of dictionary compiler Noah Webster; the cabin where Charles Steinmetz experimented with alternating current; and a pair of original slave quarters from Georgia.

Tour an actual working assembly line where America’s iconic Ford F-150 pickup trucks are built. Visits begin with a film showcasing the history of Ford Motor Company and the innovations utilized in vehicle assembly and construction of the building itself. Bus transport to the factory departs from near the entrance of the Henry Ford Museum of American Innovation.

Take in traditional and 3D films in a much-larger-than-life format at the Henry Ford Museum of American Innovation. Movies focus on nature, adventure and innovation, from national parks exploration to robotic technology, from the wonders of space to life aboard an aircraft carrier.