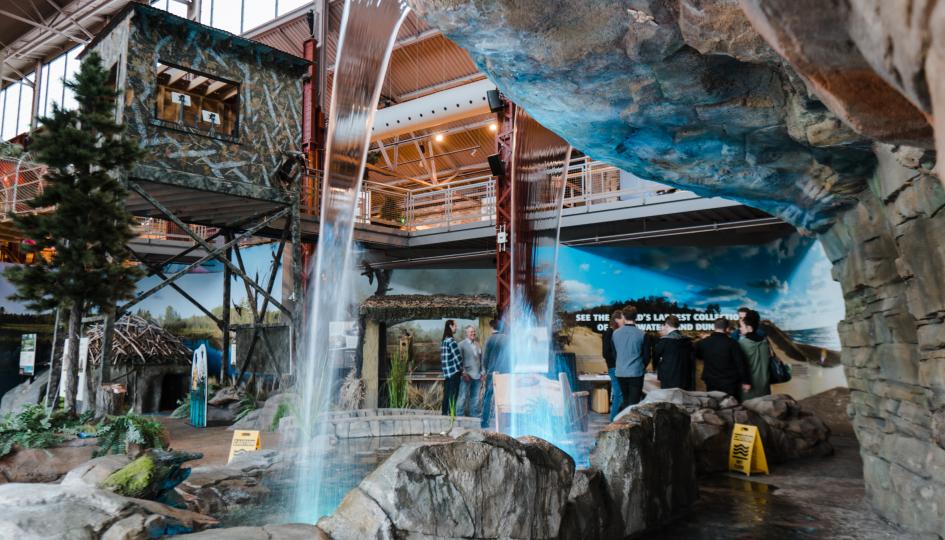 Cross a suspension bridge, touch live sea creatures, travel back in time or pilot a fighter jet for indoor fun at Michigan’s kid-friendly museums and learning centers. Kids zoom, navigate and crawl their way through hands-on dioramas and 4-D explorations—and even scale a volcano. Inquiring minds build hero figures, investigate dinosaur fossils, or soar to the moon. Our kid-friendly museums have so much to discover.

The universe swirls around kids sitting in the planetarium or on a bejeweled wooden horse of the 1928 Spillman Carousel. And the world lies at their feet in exhibits like Earth Explorers, West Michigan Habitats and Streets of Old Grand Rapids.

Air Zoo - Portage and Kalamazoo
The history of flight comes to life while watching a 4-D bombing mission or training like an astronaut at this Smithsonian-affiliated aerospace and science museum.

Curious Kids’ Museum and Discovery Zone - St. Joseph
Whether by land or by water, discoveries await at these two museums catering to the 12-and-under set. Curious Kids’ Museum’s 100 hands-on exhibits put tykes on top of a volcano, inside a giant soap bubble and in an apple orchard. Discovery Zone lets kids scale a lighthouse tower and splash through four water exhibits.

Impression 5 - Lansing
Creative minds make light paintings and upload them to the museum’s website before using their hands as plasma conductors at the Spectrum.

Great Lakes Maritime Heritage Center - Alpena
Lightning flashes, thunder claps and shipmen shout orders as a Great Lakes schooner heaves in the surf. Step aboard this schooner to immerse yourself in the history of Great Lakes shipping, then crawl through clear tunnels as if exploring one of the 200-plus shipwrecks in the nearby waters of Thunder Bay.

Frankenmuth Historical Museum - Frankenmuth
Seven galleries and hands-on and voice-over displays trace the history of Frankenmuth’s founding. Children of all heritages become German for a day as they pretend they’re a settler, touch animal hides and add Bavarian Alpine architectural details to drawings of buildings.

Sloan Museum and Longway Planetarium - Flint
Within blocks of each other, the Sloan and Longway speed you from the earth beyond our atmosphere. Peek at futuristic concept cars like the Buick Centurion while learning the history of Flint’s auto industry, then zoom to the moon at Michigan’s largest planetarium.

The Henry Ford - Dearborn
Automaker Henry Ford’s collection of Americana brings U.S. history to life with items like Thomas Edison’s laboratory, the bus in which Rosa Parks refused to give up her seat, George Washington’s camp bed and, of course, Model Ts. Ready for a break? Sit down to Wavy Cake or a Hobo Bread Sundae in a red vinyl booth at Lamy’s Diner.

University of Michigan Museum of Natural History - Ann Arbor
Free docent-led tours navigate the U of M’s collection of dinosaur fossils, models and dioramas, where pterodactyls swoop from the ceiling, T. Rex stalks the hall and whales breach beside mastodons.

Build a fort, tower or dream house with oversized foam blocks at the Ann Arbor Hands-On Museum. Pilot a plane, dig for ore and climb up a model stomach before sliding down the giant intestine at the Upper Peninsula Children’s Museum in Marquette. Ludington’s Sandcastles Children’s Museum invites aspiring veterinarians to patch stuffed animals in a kid-size animal hospital. Kids direct, divert and pool water at Water, Water Everywhere, learning the science behind fluid motion at Mid-Michigan Children’s Museum in Saginaw. Pilot an 8x17-foot freighter while loading and unloading cargo at the Great Lakes Children’s Museum in Traverse City.