Looking to spend some more time outdoors? Grab some old sneakers or even a trowel and head for Detroit! One of the country’s most industrialized cities offers you a chance to get back to nature in public gardens, nature reserves, and even small community farms. Each brings a colorful, calming, and sometimes delicious dimension to the heart of the city.

Here are some of the many Detroit locations where a journey to the natural world, in-person or virtually, can mean wandering through a grand masterpiece of landscape architecture or enjoying the intimacy of a vacant-lot vegetable garden.

If there’s anything that exemplifies getting back to nature in Detroit, it’s the Detroit River. The stunning turnaround of a once-polluted industrial waterway features the successful reintroduction of bald eagles. For more than 3 miles, the International RiverWalk runs along the river that separates Detroit from Canada, connecting public parks as it goes. It also intersects with greenways such as the Dequindre Cut. Follow this for about a mile to the Eastern Market district and its Saturday farmers market that spreads over six city blocks. In July and August, an herbal specialist leads evening walks delving into the history of native riverfront plants. You'll also learn about their incorporation into the ongoing restoration project.

Under the expansive glass dome of the Anna Scripps Whitcomb Conservatory on Belle Isle, exotic plants from around the world bring the tropics to Detroit. The illusion is especially striking in winter, when the conservatory’s cactus plants, palm trees, and blooming flowers contrast with snow falling just beyond its glass walls. The conservatory exhibits an oasis of exotic plant species among native forests of the Isle, where the 982-acre park contains native species of trees that dwindled elsewhere as the region urbanized.

In neighborhoods across Detroit, nature is not just beautiful, it’s good enough to eat. A desire for fresh food and community relationships revived the tradition of growing food in community gardens. Vacant lots sprout vegetables instead of weeds. Abandoned industrial sites burst with colors other than rust. At Cadillac Urban Gardens on Merritt, what was an auto plant parking lot now teems with beds of thriving fruits and vegetables. At the In Memory of Community Garden, lots converted to flower and vegetable gardens provide a gathering place. Some community garden efforts, like the Michigan Urban Farming Initiative, accept volunteers to help with development and maintenance.

Whether you rate your gardening skills as “expert” or “don’t know my asparagus from my elbow,” the Detroit Garden Center is here to help. From demonstrations on cleaning and sharpening garden tools to a member-created half-acre garden showcasing Michigan native plants, DGC is a one-stop-shop for information on all things horticultural. Learn what vegetables grow best in Detroit and which flowers will thrive in your garden. Their event calendar is filled with workshops, field trips, and programs dedicated to gardening.

Sometimes, the best way to discover the great outdoors is to go indoors. Inside Detroit’s historic Globe Building, the Outdoor Adventure Center brings lakes, rivers, and forests to life. It features interactive exhibits designed to inspire urban visitors to explore what they often overlook at their doorstep. One of the OAC’s most popular attractions is its 35-foot-tall bur oak tree mockup. The journey begins “underground” with its massive roots. Climb higher for a look inside a bear den. Go higher yet into the tree’s canopy to appreciate its importance as food and shelter for wildlife and as a renewable resource for people.

Experience the wilds of Detroit in your pajamas with just one click. Traveling virtually is on the rise, and Detroit has some great virtual adventures to offer. The Detroit River Cam at the Dossin Great Lakes Museum puts you almost on the deck of passing freighters and sailboats. From the Detroit Zoo, gentoo penguins are just some of the stars mugging for the camera on virtual tours of the zoo’s habitats. On the zoo’s YouTube channel, you can peek in on a Peregrine falcon nesting on a water tower. You can also view our live webcams for a look around the state at any time.

It can be surprisingly easy to be by yourself in a big city like Detroit. Rouge Park is an island of nature that comprises the largest park in the city. Follow the Prairie Pathway to the butterfly garden for a burst of color on wings, or take the Stone Bridge Nature Trail and watch for great blue herons, deer and other wildlife thriving in the heart of a great American city. 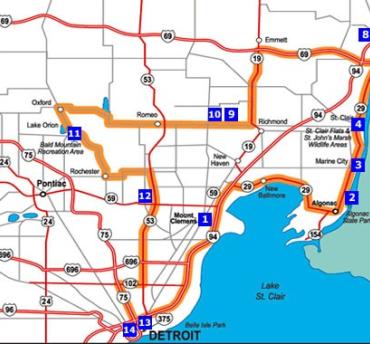