Sail Away on These Spectacular Lake Superior Cruises

Lake Superior takes its name from its northernmost position in the Great Lakes and from its size. This is, after all, the largest body of fresh water on Earth. But for many Michigan natives, “Superior” truly equates to the best, and a Lake Superior Cruise at this maritime vacation destination is unlike any other in Pure Michigan and beyond.

Splashing the northern shore of Michigan’s Upper Peninsula, Lake Superior covers an amazing 31,700 square miles and reaches to a depth of over 1300 feet. And while the lake is awe-inspiring from every angle—from beachcombing spots beneath a historic lighthouse, from the wooded paths of the North Country Trail and from its brisk swimming beaches—Lake Superior’s power and beauty may be best enjoyed from the deck of a boat. Here are a few of our favorite Lake Superior cruises.

The wind snaps the sails and the Lake Superior spray fills the air on Lake Superior cruises aboard the Coaster II. The wooden, two-masted schooner was constructed in 1933 in Maine. But after 75 years of sailing on the Pacific and Atlantic Oceans, the 58-foot ship graduated to the lovely shores of Marquette in recent years, cruising the waters of Lake Superior. Tours range from 2-hour tour explorations of Marquette’s harbor to 4- and 8-hour jaunts around Presque Isle, Partridge Island or Granite Island.

Dramatic waterfalls and stunning rock formations like Miner’s Castle tower over Lake Superior’s whitecaps at Pictured Rocks National Lakeshore. Cool breezes off the Big Lake refresh mind and body. And the russet and yellow hues of 200-foot cliff faces glow red and gold in the slanting rays of a setting sun. Pictured Rocks Cruises take in these sights and far more on 2- to 3-hour cruises of Michigan’s remarkable National Lakeshore—sights that simply cannot be seen in any way but by boat. The views become even more spectacular when autumn turns the Upper Peninsula backdrop into a riot of fall color. Cruises depart Munising throughout the warm weather months.

Amp up your Pictured Rocks cruise aboard the Riptide Ride, a high-speed boat tour that promises 360-degree spins and hairpin turns. The 90-minute tours sail along 25 miles of the Pictured Rocks National Lakeshore, stopping for photo ops and narration at the park’s most spectacularly colorful rock formations and waterfalls. And because of the Riptide’s relatively small size, the boat can pull up closer than standard Pictured Rocks cruises. Tours are appropriate for ages 3 and up and depart throughout the warm weather months.

Michigan’s only true national park, remote Isle Royale sits surrounded by the deep blue waters of Lake Superior. It’s a long way from the Upper Peninsula to this northern idyll by boat, but the journey allows the opportunity to fully appreciate the expanse and beauty of the northernmost Great Lake.

The Ranger III travels to Isle Royale from the Upper Peninsula town of Houghton throughout the warm weather months. The largest piece of moving equipment owned by the National Park Service, the Ranger III measures 165 feet long and can carry 128 passengers and private vessels up to 20 feet long! On the departure from Houghton’s Portage Canal, the ferry cruises beneath the world’s largest lift bridge, linking Houghton and Hancock, and past the dramatic shoreline and towering lighthouses of the Keweenaw Peninsula before leaving the Upper Peninsula for Rock Harbor, a trip that takes about 6 hours.

The Isle Royale Queen IV departs Copper Harbor for Isle Royale all summer long, making the journey from the Keweenaw Peninsula to Rock Harbor in just over 3 hours before returning to the U.P. the same day.

The Voyageur II offers Lake Superior ferry service at various ports around Isle Royale all summer long. The ship provides spectacular views of Isle Royale’s wilderness from the water and also serves as a key mode of transport for backpackers looking to speed travel between the island’s Windigo, Daisy Farm, McCargoe Cove and Rock Harbor docks.

Leisurely sightseeing cruises of the Isle Royale Lake Superior shoreline are the specialty of the MV Sandy. Guided by National Park Service rangers, the cruises include narration and frequently allow the opportunity to disembark on remote islands for ranger-led hikes. The sightseeing tours depart from the Rock Harbor Lodge dock and head to destinations like Hidden Lake, Raspberry Island, the Edisen Fishery and Rock Harbor Lighthouse.

Michigan’s oldest city gave French fur traders and missionaries a difficult time back in the 1600s. A series of rapids in the St. Mary River, which links Lakes Superior and Huron with one another, forced a long and difficult portage of their vessels and goods. Since the mid-1800s, the Soo Locks have made journeying between these two Great Lakes easier. Today, visitors can experience first-hand what it’s like to rise the 21 feet from Lake Huron’s height to Lake Superior’s on a Soo Locks Boat Tour. While it’s not the classic Lake Superior cruise, the trip offers a memorable opportunity to observe one of America’s most important transportation hubs—and one of Pure Michigan’s most unique travel experiences too! 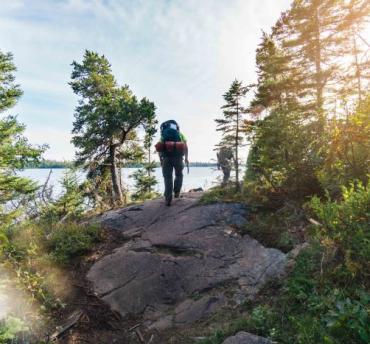 4 Scenic Places to Visit on an Upper Peninsula Road Trip 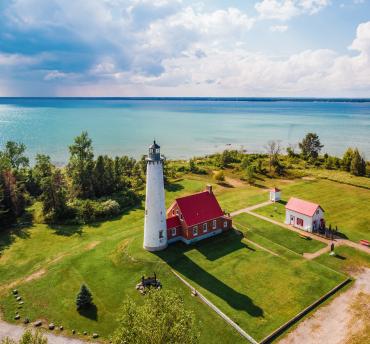