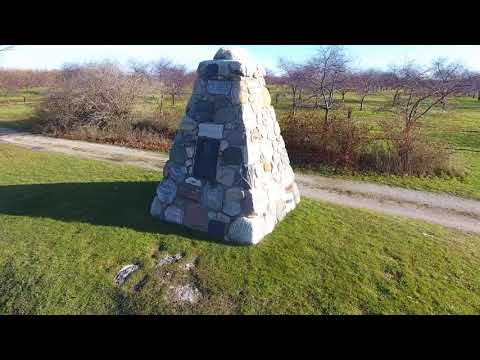 Located on old US-31, just north of Kewadin in the south end of Antrim County, the cairn was constructed of 83 stones, one furnished by each county in Michigan and inscribed with the donating county’s name. The exception was Wexford County’s “stone,” which was actually a two-foot-square piece of rubber with the county’s name engraved on an attached steel plate. The stones were transported free of charge to the site by the Père Marquette and Pennsylvania railroads. Masons from Antrim County and workers from the Michigan Highway Department constructed the cairn.

The monument is 12 feet square at the base and 16 feet high. On the cairn is a bronze plaque bearing the likeness of Mr. Gray with the inscription “Hugh J. Gray – Dean of Michigan’s Tourist Activity.” Inside the monument is a sealed crypt holding resort booklets and brochures from every section of the state and various Michigan newspapers carrying stories of the dedication and articles of Mr. Gray’s promotional efforts.

The cairn is located at approximately the 45th parallel. The cairn was a major roadside attraction in its first years, but its popularity faded after 1955 when US-31 was routed more directly north out of Elk Rapids. The old US-31 was renamed the Cairn Highway in honor of the monument.

The Hugh J. Gray Cairn was officially dedicated on June 28, 1938, largely for his work in creating the West Michigan Tourist Association.