Inside Secrets for Viewing the Northern Lights in Michigan

The aurora borealis is a breathtaking sight that many consider themselves lucky to catch. I'm Shawn Malone, a Marquette-based visual artist and I'm sharing my secrets for viewing the Northern Lights in Michigan. 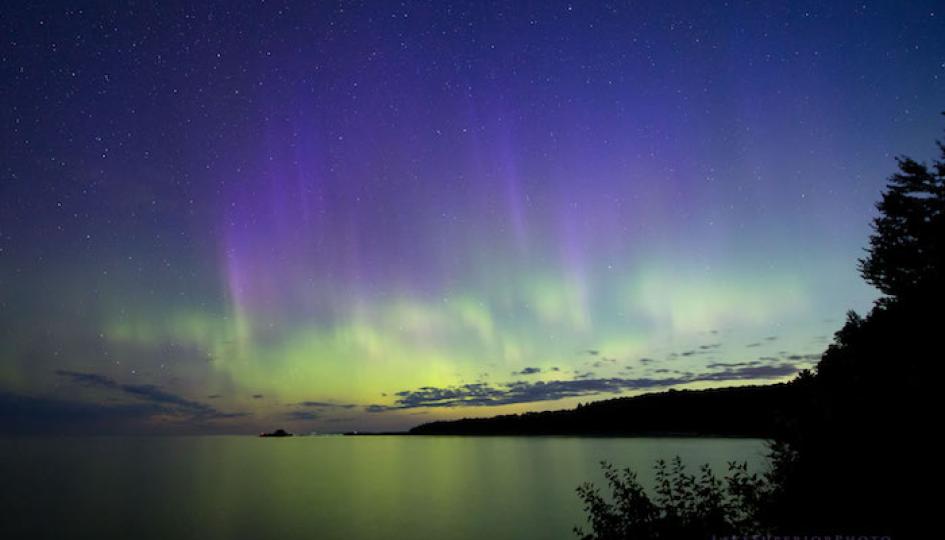 The aurora borealis—it amazes, energizes and astounds with no two events ever being the same. Michigan has a lot of things going for it when it comes to northern lights viewing, the most important being 1). latitude,  and 2). relatively low light pollution in many areas.

Northern Michigan sits in a great location latitude-wise, as the auroral oval dips further south on nights of stronger auroral activity. The Upper Peninsula is blessed with hundreds of miles of shoreline along the south shore of Lake Superior, which provides some of the best northern lights viewing in the lower 48 due to the very dark night skies. When looking north over Lake Superior, one can see right down to the horizon and take in a 180-degree unobstructed view of the night sky. Getting to a location without the obstruction of a treeline or hills is important at our latitude, as many times an auroral display will sit very low on the horizon. Having a dark night sky with little light pollution is necessary when looking for the northern lights, as the light of the aurora is equal to the brightness of starlight.

People often ask me how I've been able to see so many northern lights displays over the years and a lot of it has to do with what I mentioned above. I live in Marquette, Michigan which sits centered on the south shore of Lake Superior, and when looking north, there's nothing but lake for hundreds of miles. Marquette and locations nearby have many areas along the lakeshore still publicly accessible, allowing for the opportunity to view the aurora right from the shoreline.

Get away from the light domes of the cities and head north on I-75 and get to a dark sky location in Upper Michigan. If you make it as far as the bridge, check out Headlands International Dark Sky Park, two miles west of Mackinaw City. This is a newly designated international dark sky park, one of the few dark sky parks in the country.

Once you're in the Upper Peninsula, anywhere along the south shore of Lake Superior is optimal: Brimley, Whitefish Point, Pictured Rocks, Autrain, Marquette, Big Bay, Skanee, Eagle River, Eagle Harbor, Copper Harbor are just a few of the places that come to mind. Let your eyes adjust to the night sky, set up a lawn chair and a blanket, and enjoy one of nature's most spectacular wondrous light shows, the northern lights! It is an experience you won't soon forget.

About the Author: Shawn Malone is a visual artist based in Marquette, Michigan.  Her photo/video portfolio of the aurora from Michigan has been internationally awarded and recognized, with the video, "North Country Dreamland" being a Smithsonian 2013 viewer's choice winner. Her work has also appeared on network TV numerous times as well as web and print media across the globe. Malone has an art gallery in downtown Marquette, LakeSuperiorPhoto.

Editor's Note: There are multiple places in Michigan to see northern lights. If you're able to catch them, share your photos with us on Facebook!