10 Things You Might Not Know About Mackinac Island's Grand Hotel

Since 1887, Grand Hotel has been a defining feature of historic Mackinac Island, where horse-drawn carriages and bicycles are the modes of transportation. The hotel was originally built by two railroads and a steam ship company who needed to create a grand destination for the gilded age traveler to escape the scorching summer heat, dust and dirt of America’s industrial cities.

Here are a few things you might now know about Grand Hotel that make it a true American icon.

1. No Two Guest Rooms are Alike

Each of Grand Hotel’s 397 guest rooms has its own unique character, artfully decorated by Carleton Varney of Dorothy Draper & Co. Inc. in New York City. Varney is also known for his design consultancy at the White House.

3. Grand Hotel is a Family Business

Grand Hotel has been associated with the same family since 1919 and owned solely by them since 1933. W. Stewart Woodfill came to Grand Hotel in 1919 to work as a modest desk clerk and worked his way up the ranks to manager and eventually owner. His nephew came to work fulltime the hotel in 1951 and like his uncle, ascended the ranks to president and wife Amelia Musser became the secretary treasurer, they ultimately purchased the hotel in 1979 keeping it in the same family. Today, the Musser family still runs the business.

At 660 feet long, no other hotel in the world can match it. That includes relaxing in a rocking chair while enjoying stunning views of the Straits of Mackinac.

More than one ton of flower bulbs are planted each fall to create the many gardens on Grand Hotel grounds. Varieties include tulips, daffodils and geraniums, the hotel’s signature flower.

6. You Can Find Grand Hotel in Somewhere in Time

This 1980 classic film starring Christopher Reeves and Jane Seymour was filmed on location at Grand Enthusiasts of the film meet every year in October to celebrate the cinematic secrets of the timeless classic and meet cast members.

Fresh pecans are a necessity for Grand Hotel’s signature dessert. Made with vanilla ice cream and Grand Hotel’s original fudge sauce, more than 60,000 balls are served each season.

Grand Hotel’s award-winning golf course, The Jewel, is the only course in the world where players are transported between the front and back nine via horse-drawn carriage. 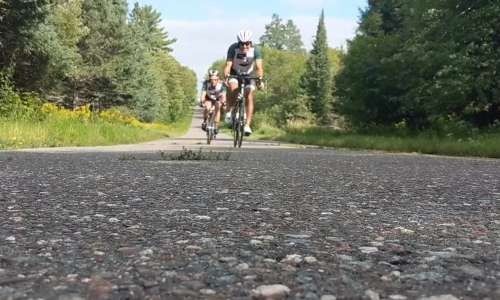 Camping in Michigan is the Perfect Summer Getaway

20+ Things to Do in the Upper Peninsula: Your Ultimate UP Bucket List
×