Mackinac Island, known for horse-drawn carriages and deep history, is also known for its signature sweet treat, fudge. Visitors can enjoy a taste as they roam downtown where 14 fudge shops collectively make more than 10,000 pounds of fudge per day during the peak travel season. 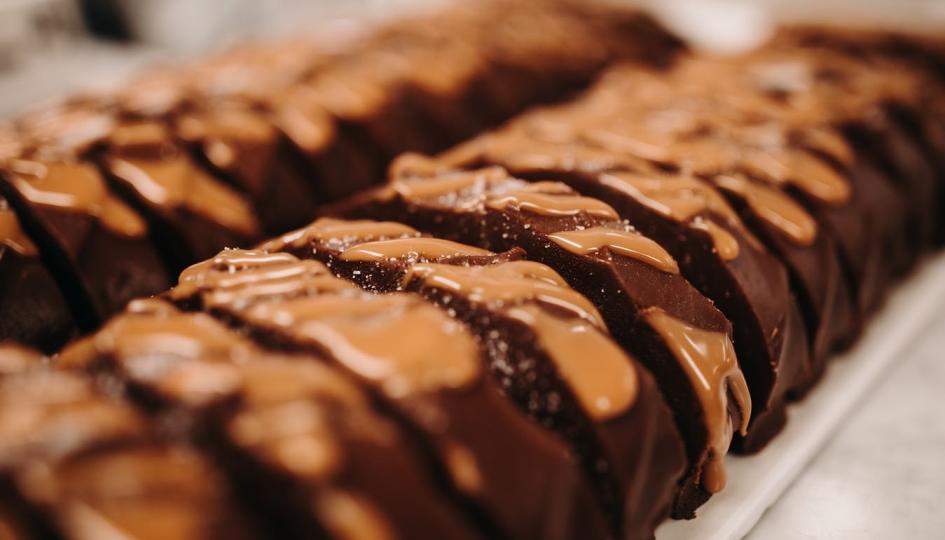 In addition to sampling, sweet-toothed tourists can watch the fudge-making process. The dessert is so popular, as many as 10 tons of sugar are imported to the island weekly to match the 10 tons of butter annually! Even President Gerald R. Ford stopped at May's Fudge and purchased a fresh-off-the-slab slice of vanilla pecan when he visited Mackinac Island in 1975. See what it takes to make Mackinac Island's sugary staple and where you can find it below.

The team has the process down pat: One person weighs the ingredients—raw chocolate from Germany, sugar from Bay City, and cream and butter—into a copper kettle set over a propane gas burner. The maker constantly stirs with an oak paddle until the sugary mixture reaches a roaring boil, about 16 to 17 minutes. Next, they pour the hot liquid onto one of three original marble tables, which weigh 750 pounds. Light fudges—vanilla, maple, pecan and peanut butter—are made before chocolate fudges because the tables need to be warm for the chocolate to cream out before it can be folded into shape. As the fudge cools, the chef works around the 5-foot-long marble slab, folding the fudge with a flip of their wrist. When the fudge resembles a giant loaf, the cutter steps in and begins slicing. Every batch yields 60 to 63 half-pound slices.

Throughout the day, the team makes between 15–20 batches of fudge, which means purchases are never more than 24 hours old.

Ryba's Fudge Shops started in 1951 with a popcorn and confection store in Detroit. They started making fudge in 1956, calling themselves Mackinac Island Fudge. They moved to the island in 1960 where they changed the name to Ryba’s Fudge Shops. Ryba's now has five locations on Mackinac Island and two in Chicago. In 1969, they purchased the Island House Hotel, which was to be slated to be torn down due to its state of disrepair. The Island House was renovated and reopened in the 1970s. Over the years, it has gone through several more renovations and is now a registered Michigan historic landmark.

Ryba’s offers ten flavors of fudge to choose from, all made by hand on marble slabs so it is smooth, unlike other fudges.

Joann’s has authentic Mackinac Island Fudge, made fresh daily with real cream, butter, and only the finest natural ingredients. Joann’s offers 25 fantastic flavors as well as an assortment of hand-dipped chocolates and sugar-free candies.

To obtain the world famous taste, the fudge is slowly cooked in traditional copper kettles over a gas flame. Once the desired temperature is reached, the mixture is poured onto marble slabs for a cooling period and then hand-paddled into loaves. Joann's Fudge does not contain any preservatives or powdered ingredients.

During WWII, the U.S. implemented sugar rationing to keep food supplies available to all, which limited May’s fudge production. Harold May decided to only make fudge in the mornings and open the stores at noon every day, selling only one pound of fudge per customer. Customers lined up outside for their share of fudge and the shop would sell out in two hours! When WWII ended, people remembered how May’s kept producing fresh fudge and flocked there, which is how the May family made fudge famous. May’s has been family operated for four generations and is currently the oldest fudge shop on Mackinac Island. It is the only fudge shop that has been visited by an American president!

Mouthwatering Michigan Desserts to Sink Your Teeth Into 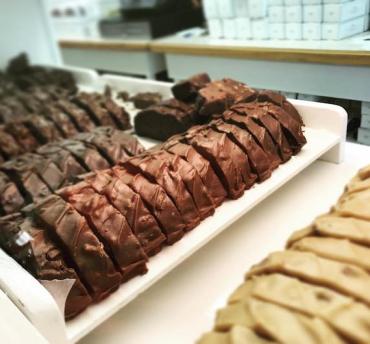