A Look at 6 Haunted Places in Michigan 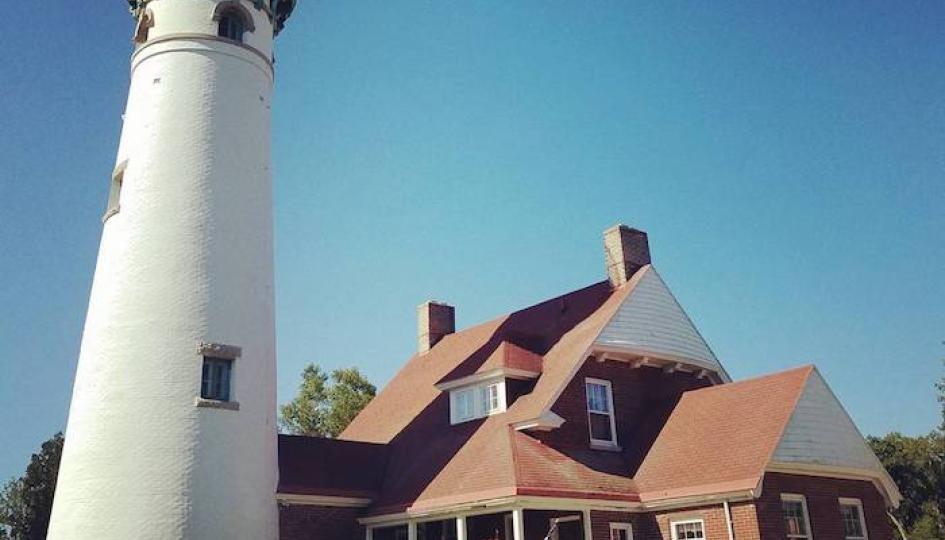 Are you interested in all things paranormal? Take a journey into some of the most haunted places in Michigan! From lighthouses to restaurants, there are a slew of locales that have a supernatural past all across the state. Keep reading to learn more about these eerie spots, courtesy of Kat Tedsen and Bev Rydel.

In 2007, as skeptics, we began our search for the truth. After well over 200 investigations, we have found 30 accounts in Michigan alone that carry a mystery leading us directly to the paranormal … events that simply cannot be explained. These accounts are now part of our Haunted Travels of Michigan book series.

Don’t just believe us. To determine if paranormal reports at various spots around the state were myths—or something more—we worked with video, audio, and photographic professionals not related or linked to the paranormal. We wanted completely objective feedback on suspect evidence collected during investigations.

Sit back with a glass of fresh cider and a tasty cinnamon doughnut, whatever the season, as we share just a few of our favorite Michigan haunts. Then, perhaps plan a trip to see what we found for yourselves—if you dare.

The Doherty family has owned and operated the hotel since it opened in the 1920s. The Doherty men were and remain the business managers. However, as Jim Doherty (a current owner) tells it, it was the Doherty women who were the heart and soul of the business. The hotel has a colorful history. During prohibition, it was a speakeasy, a place for backroom gambling, and adult entertainment. It was also a meeting place for the Mafia and Purple Gang. Here they worked out their differences. In 1938 the hotel was the site of one of Michigan’s most notorious murders. Isaiah Leebove, former Purple Gang attorney turned Purple Gang businessman, was murdered in the bar. He was shot dead by his cousin and business partner Jack Livingston.

Over the years there have been numerous yet vague accounts of its haunting. Some believe Isaiah Leebove may remain along with family matriarch, Helen “grandma” Doherty. The evidence we collected was startling. Perhaps the most surprising evidence was recorded in a back room where Grandma Pemble’s body was placed after her death. In this area, the voice of a woman was recorded. It was soft and feeble as if she were either very old or very sick. The words were in response to questions asked. We believe it was the voice of Helen “grandma” Doherty.

Over the decades there have been many reports of paranormal activity at this Victorian inn just north of the city of Petoskey. If you ask the desk clerk for the inn’s “Ghost Files”, they’ll hand over a thick folder with accou nts from past guests and employees. Based on the evidence we’ve recorded, it seems these reports may very well be true. After five years this historic inn, remains one of our most paranormally active locations.

There seem to be three prominent spirits that wander the inn. The first is a lady in white seen in the hallways and guest rooms. Could she be looking for the man in tweed, another ghostly apparition was seen on the balcony? Then there is  the interactive youth, a lad of perhaps 12 or 14 years of age, who inhabits the basement. Our compelling recorded evidence and in-depth historical research lead us to believe we have identified these wandering spirits and why they may remain.

Located on Woodward Avenue, this exquisite restaurant was the former mansion home of David Whitney, Jr. Mr. Whitney was one of the Midwest’s wealthiest lumber baron at the turn of the century, and he built this magnificent 21,000 square foot home in 1894. Since the mansion’s restoration in the mid-1980s, reports of unexplained activity have existed.  Shadowy apparitions have been seen on the second floor, disembodied voices have been heard, and other strange phenomena have occurred. The Whitney was one of our first investigations, and it changed our view on the existence of ghosts and the paranormal. It brought us from skeptics to believers. People often tell us of getting feelings they think relate to nearby ghosts. We dismissed it as overactive imaginations until we had such an experience at The Whitney during an after-hours investigation. Kat was standing on the second floor when the atmosphere, strangely enough, changed around her. Just as people had explained, the atmosphere became thick, charged. She said, “I’m getting something here.” Later, when audio was reviewed, a disembodied voice was clearly heard saying, “That’s right.” Followed by the words, “I am still here.”

Around the same time, Bev was alone on the first floor asking any spirit to knock on the wall. She didn’t really expect a response but was stunned when she heard a loud, resounding rap on the wall next to her. She asked for another response and received it. Although she didn’t hear it at the time, a clear voice was recorded that simply said, “Hi.” During follow-up investigations, the sound of a piano was consistently heard and many other unexplained voice phenomena recorded. Our extensive historical research turned up the fact that both Mr. Whitney and his wife passed away in the home. Based on the evidence and known events that happened in the house, we believe members of the Whitney family have never left. David Whitney and his family had an incredibly strong bond that has connected them both in life and in death. It’s one of our favorite stories.

Who doesn’t like the romance, mystery, and history of a lighthouse? Michigan has several that are said to be haunted. We’ve investigated a few without success until our time at Seul Choix Point. Who haunts this Upper Peninsula lighthouse? For decades it’s been said that Captain Willie Townsend, former light keeper, remains attached to the old structure. It is also thought two female spirits wander the light keeper’s residence. One of them is Mary “grandma” Pemble, the mother-in-law of a former light keeper. Grandma Pemble died there during one of Lake Michigan’s worst blizzards, a blizzard that assailed the lighthouse. Like an invading army, the wind and snow smashed through windows and assaulted the rooms. There have been extensive accounts of activity by visitors and employees. There have been reports of apparitions, objects moving, the scent of Captain Townsend’s cigar smoke, and much more. During our investigation, though, we did not come up with clear evidence of Willie Townsend. However, we did capture several disembodied male voices. Who knows? One of them could have been Willie.

Established in 1838, Michigan’s First State Prison remained in operation through 1934. It was an incredibly brutal place that housed some of the state’s worst criminals and was known for its prisoner neglect, abuse and torture. Today the old prison has become the Armory Arts Village, a residence, and studio for local artisans. Apartments are very contemporary and halls covered with artwork. In spite of its modern renovations and freshly painted walls, though, rumors persist of its haunting. A few artisans have even drawn sketches of the fleeting apparitions they’ve seen wandering hallways. Judy Krasnow is the owner and operator of Jackson Journeys, LLC. Judy hosts daytime historic tours of the prison, so a visitor can see (and feel) the hauntings for themselves. She is also the resident expert of the prison’s history and lives on-site. She swears her apartment, which was once a series of prison cells, has ghosts. Judy is not the only resident who believes that.

Even though the upper floors have undergone renovation, the underground section that held solitary confinement remains structurally intact. Although cells have been removed, there is intensity in this area that cannot be denied. Perhaps the most darkly powerful location is the tunnels. As Judy tells us, these small cramped, underground passageways once took guards to the watchtowers and their cottages on the outside of prison walls. Prisoners were also taken through the tunnels to get to and from work. It is believed the tunnels may have been used for prisoner discipline. There is no doubt, even the bravest ghost hunter would feel vulnerable and intimidated in these endlessly dark tunnels. We began our series of investigation in early 2012. These included private investigations with our core team and, later, public investigation for guests. The volume of recorded evidence collected to date is remarkable. There is no question many inmates at Michigan’s First State Prison have never left.

Mackinac Island is one of the most historic, beautiful and unique locations in the country. The history of the island dates back thousands of years. It was home to Native American settlements long before European exploration began in the 17th century. The island saw at least two battles during the War of 1812 and, over the centuries, it has been the scene of many tragic deaths. It is no wonder that urban legends continue to build on the island’s paranormal activity. Many seem to believe the beautiful Grand Hotel is the primary focus of ghostly phenomena on the island. Unfortunately, the Grand Hotel does not permit paranormal investigations. Until they do, those legends must remain just legends. Another location believed to be haunted is Fort Mackinac. It has a rich history with many tragic stories behind its stone fortress. But, like the Grand Hotel, the fort does not permit paranormal investigations. For now, the stories must remain just stories.

Let’s talk about the locations where we have recorded evidence, however. The first is Mission Point Resort. Mission Point has gone through many changes since its beginning in 1827. The area first served as a missionary school for children of mixed Native American-European blood. For a short time, it served as Mackinac College. Today, it's a luxury resort on the island’s east side. Based on our multiple investigations, it seems the stories of its haunting have, at least, some basis in truth. Evidence has been recorded in the theater, outside grounds, and some of its rooms. According to Todd Clements, author of “Haunts of Mackinac,” a common thread for the haunting seems to be a young college student back in the 1970s who reportedly committed suicide. They refer to him as Harvey. Although the official report is suicide, Todd suspects Harvey’s death may have been murder. We believe, like Todd, that more than Harvey haunts the resort.

Next would be the ruins of Fort Holmes. When we first investigated the old ruins, we were hoping to identify evidence pointing to soldiers. Instead, what we captured were disembodied voices speaking Ojibwa. Interesting. Other areas where evidence was captured is the old Post Cemetery and several back trails on the island. One of the trails was the road where Harvey’s body was found. These are just a few locations on Mackinac Island we’ve discovered to be paranormally active. With its rich history and centuries-old buildings, there are likely many more still to be discovered.

About the Authors: Bev and Kat’s Haunted Travels of Michigan book series includes the above locations and many more. The books are all web-interactive, and each story has a special password that links readers to our website Secret Rooms where they can access recorded evidence. More information on Haunted Travels of Michigan’s books, presentations, and public ghost hunts can be found at www.hauntedtravelsmi.com. 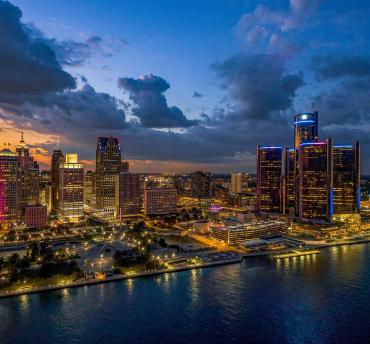 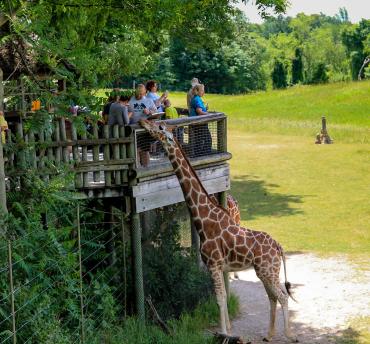