Michigan Urban Legends to Tell Around the Campfire

Guest blogger Joel Heckaman put together this list of Michigan urban legends and myths that you can explore for yourself. 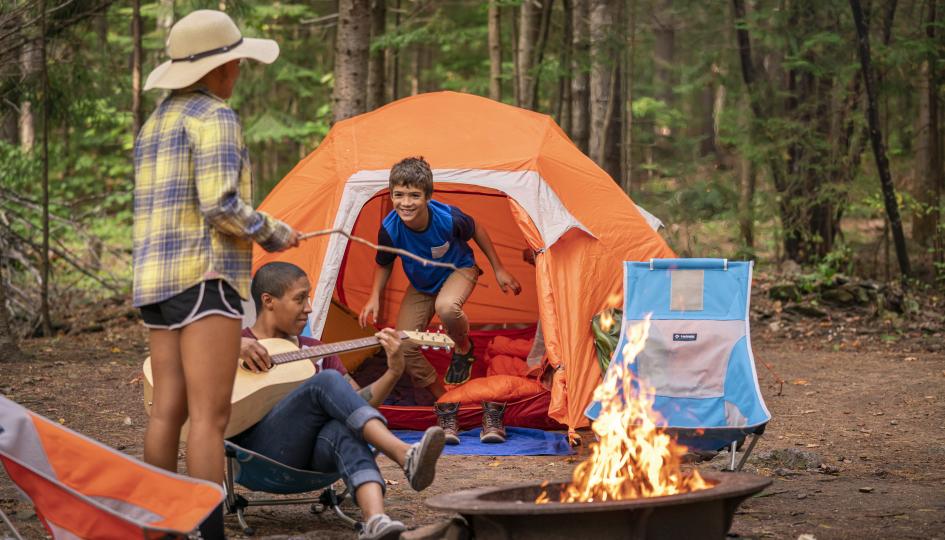 1. The Singing Sands of Bete Grise

On the south side of the Keweenaw Peninsula is a beautiful beach that contains more than meets the eye. The legend is that a Native American woman lost her love to Lake Superior and, because she spent the rest of her life on the beach crying and calling out to him, the white sand still calls to him to this day. You can reawaken her voice by making the sand sing with the palm of your hand, by patting or brushing the surface. However, it only works if you’re on the beach at Bete Grise. Take the sand anywhere else, and it loses its voice.

Between the Upper Peninsula and Green Bay, there is a chain of small islands in Lake Michigan. Somewhere in this area (no one knows for sure) is a mysterious shipwreck that is considered a historic “holy grail.” The first full-size cargo ship to sail the inner Great Lakes, Le Griffon was built by explorer Robert de La Salle in 1679. The ship was a work of art, featuring a majestic griffin (half lion, half eagle) figurehead on its front and an eagle on its stern.

Le Griffon started her maiden voyage up the Niagara River to Lake Erie, gave Lake St. Clair its name while passing into Lake Huron, and stopped in Mackinaw City for Sunday Mass before landing at Washington Island, at the mouth of the Green Bay. There, the crew loaded the ship to the brim with valuable furs and other goods, while La Salle stayed ashore to make plans for further exploration west. Le Griffon departed for a return trip to Niagara slightly more than a month after its initial departure.

Unfortunately, the ship and crew were never seen or heard from again. Many assumed that Le Griffon was lost during a fierce storm shortly after leaving port. Others reported that the ship was boarded and burned down or destroyed. This could have been the work of rival fur traders, local Native American tribes, or nearby Jesuits, all of whom were threatened by La Salle’s plans for westward expansion. La Salle believed that the weary crew, who had been forced to build the ship in harsh winter conditions with limited resources and under the constant threat of attack, had finally been convinced to mutiny by the untrustworthy pilot. He figured that they made off with the cargo before sinking the ship. We may never know what happened to Le Griffon, and the only clues lie in remains that may never be found.

With all this talk of bizarre things on or in the water, it makes you wonder what else might be down there. One famous lake monster, somewhere in the deep, clear waters of Torch Lake, has been preying on unsuspecting visitors and campers of YMCA Camp Hayo-Went-Ha for generations. Dave Foley, a counselor at the camp in the 1960s and ‘70s, takes credit for starting the myth, which was later popularized in a song by fellow counselor and folk musician Bob Thurston. “One eye is brown, one eye is blue / His body covered all in icky green goo,” the lyrics sang. The presence of 50-pound muskies in the lake likely contributed to his tale. But another legend speaks of a sea panther, claiming that Torch Lake contains a monster with the head of a cat and the body of a lizard. Did Foley make up a monster story to entertain campers, only to stumble upon something even scarier?

Let’s take a step out of the water for a moment and visit another one of Michigan’s great defining features: lighthouses. Ships traveling between the Straits of Mackinac and Lake Huron need to make a turn at Presque Isle, on the northeast corner of the Lower Peninsula. Old Presque Isle Light was built in 1840 to help guide safe passage, but it deteriorated quickly. In less than 30 years, it was replaced by New Presque Isle Light slightly farther north, which is still in operation today.

Old Presque Isle Light was refurbished as a museum in 1977, with George and Lorraine Parris hired as the original caretakers. They loved their role so much, George didn’t want to leave, even after his death in 1991. Lorraine first saw the lighthouse fully lit in 1992, despite all of the wiring being removed or disconnected for decades. Since then, sailors, pilots, and spectators from across the harbor have reported seeing the yellow glow, long after the bulb was removed from the lens. Many have also seen a figure in the lantern room, and others report mysteriously helpful coincidences around the lighthouse. The Coast Guard does not have an official explanation, but it sounds like George is still enjoying the lighthouse while helping visitors from the other side.

Another inexplicable light shines in Paulding, a town near Sleepy Hollow on the west edge of the Upper Peninsula. Heavy woods surround the area, and a stretch of northbound Old US-45 ends abruptly at a sign from the U.S. Forestry Service. “This is the location from which the famous Paulding Light can be observed,” it reads. “Legend explains its presence as a railroad brakeman’s ghost, destined to remain forever at the sight of his untimely death.” Power lines and a service road cut straight through the trees as far back as the hills will let you see, and it’s in this clearing that sightings of the Paulding Light have happened almost nightly since 1966. Some explain the light with different ghost stories, while others contend it’s swamp gas or car headlights. Until you see it for yourself, there’s no way to be sure.

One of the most popular urban legends in Michigan involves a tall, dog-like creature with piercing eyes and a screaming howl. Neither a werewolf nor Bigfoot, instead you’ll find Dogman roaming the northern woods of the Lower Peninsula. Steve Cook, then a DJ at a Traverse City radio station, claims that he started the myth when he made up a song about Dogmen titled “The Legend” as an April Fool’s Day joke in 1987.

Cook clearly underestimated this legend, as people quickly started calling in to corroborate the stories of their encounters. One man recalled an incident with the beast from 1938, when he was approached by a pack of dogs. Several scattered when he fired his rifle into the air, but one simply stood up tall and glared at him before sprinting away. The first reports of Dogman date back to 1887, when two lumberjacks saw a creature with a man’s body and a dog’s head, but there are also similar reports from French fur traders dating as far back as the early 1800s.

An unusual animal attack in the nearby town of Luther in 1997 seemed to confirm Cook’s prediction of a ten-year cycle for Dogman attacks, but video evidence of an attack in 2007 turned out to be a hoax. With the next round of Dogman sightings expected in 2017, will modern technology finally allow us to capture proof of this beast when it appears… and will you be brave enough to face it when it does?

Not wanting to leave you too freaked out about our great state, our list ends with an urban legend that will make you feel good. At least three universities have versions of this story, and it’s likely that many more have something similar.

At Michigan State University, the gorgeous Beaumont Tower stands above the trees in the middle of north campus. The spot itself has its own historic value, but today’s legend involves a kiss in the courtyard. A couple who kisses at this spot, either in the tower’s shadow or at the stroke of midnight, is destined to marry. One is only a “true Spartan” once they have kissed under the tower.

Each entrance to the University of Michigan’s Diag has its own charm, but the Engineering Arch has a special romantic importance. The legend is that college sweethearts who kiss under the arch at midnight will be destined to marry. This is more common as mythology than practice, but it’s a popular place for alumni to go for wedding or engagement photos.\

The seven-foot tall Central Michigan University seal has stood in front of Warriner Hall for generations. For just as long, there has been a legend that anyone who kisses their lover in front of the seal, at the stroke of midnight and under a full moon, will be together forever and destined to marry. And just when you thought you were done with ghost stories… the myth involves two star-crossed lovers who were supposed to meet under the seal at midnight to run away to get secretly married. The girl arrived early to wait eagerly, while the night kept getting colder and colder. The boy’s car broke down, and he was delayed several hours. He arrived to find her still there, frozen to death, determined to wait for him until the very end. As he cried and scooped her into his arms, he kissed her one last time and died of a broken heart. It’s said that the lovers were reunited in the afterlife, and their spirits visit the seal at midnight to bless lovers at their alma mater.

About the Author: Joel Heckaman is a longtime Michigan resident who loves the culture, scenery, beer and music of the mitten state. He is a Michigan State University alumnus and founder of the Middle of the Mitten local music festival. He is also a social media professional with experience working with MSU, UM, TEDxDetroit, the Big Three and other proud Michigan brands. You can find him talking about many of these things, as well as cheering on the Spartans and Red Wings, on Twitter and LinkedIn. 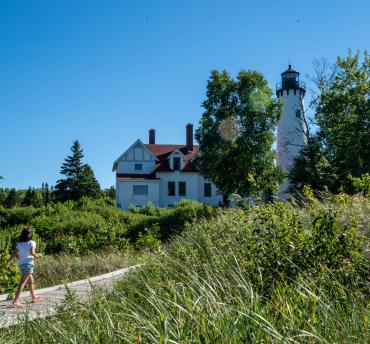 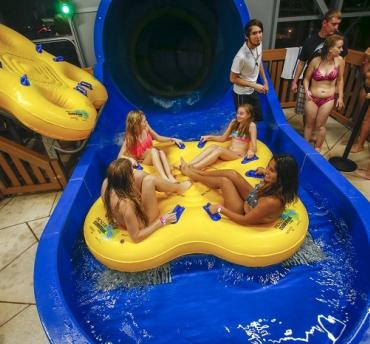