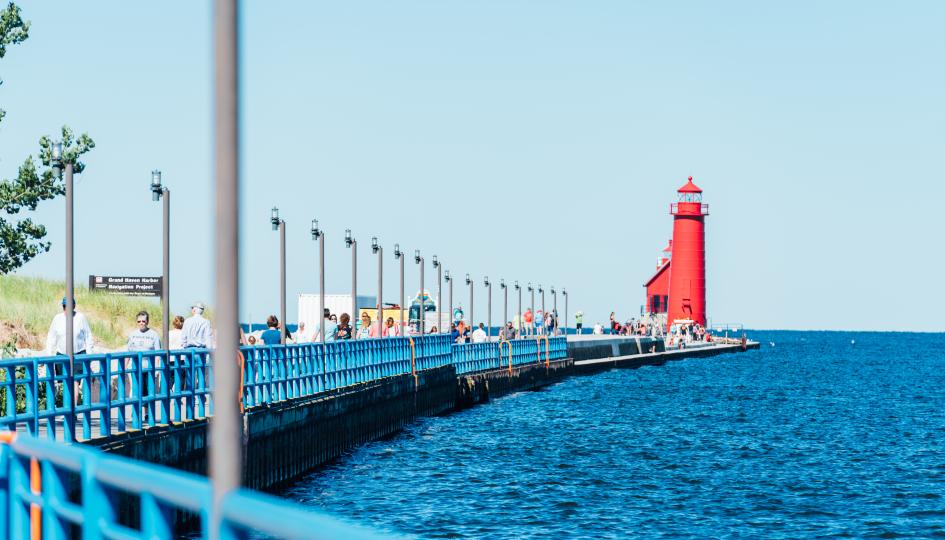 Washed by Lake Michigan’s surf, home to magnificent fruit farms and rich cultural traditions, Southwest Michigan feels miles away from the ordinary. But this beautiful corner of the Great Lakes State lies just a short drive from the Midwest’s largest cities. Check out our favorite things to do in Southwest Michigan.

1. Head for the Beaches

A wide swath of golden sand rims the Southwest Michigan shore, assuring visitors to this region that they’ll never be far from a terrific beach. Visit Grand Haven State Park for swimming, beach volleyball and people-watching. Head to Saugatuck Dunes State Park for a natural getaway dominated by quiet, wooded dune trails and an uncrowded beachfront. Or choose from a dozen others throughout the region.

Fertile soils, moderate temperatures and ample rainfall make southwest Michigan a prime region for winemaking. Many of Michigan’s best and most experienced winemakers call this region home, producing and bottling excellent vintages at wineries such as Tabor Hill, St. Julian and Round Barn.

The twin cities of Saugatuck and Douglas form Michigan’s “Art Coast,” a centerpiece for art and culture for more than a century. You’ll discover dozens of galleries, shops, art fairs, and art classes as well as the Saugatuck Center for the Arts, all in this small corner of Southwest Michigan. In the city of Grand Rapids, art reigns supreme at nationally-celebrated venues like the Frederik Meijer Gardens & Sculpture Park and the Grand Rapids Art Museum.

Play a round of golf at Harbor Shores, Benton Harbor’s spectacular Jack Nicklaus signature course. The course’s 18 holes take in sweeping views of Lake Michigan, the banks of the Paw Paw River and rolling sand dunes. Harbor Shores hosts the Senior PGA Championship in even years through 2024.

Feast on South Haven’s most famous crop: blueberries. Buy berries by the case or pick your own at local farms like DeGrandchamp’s in July and August (fresh cranberries arrive in October). You can cap off the fun at the National Blueberry Festival held annually in August, with blueberry pancake breakfasts, a blueberry market and even blueberry wine tastings.

Holland celebrates its Dutch heritage at Windmill Island Gardens, a beautifully landscaped garden with a graceful 18th-century windmill at its center. Tour DeZwaan, the United States’ only authentic Dutch windmill, to see the 5-story mill in action, then buy a sack of windmill-ground flour to take home.

With more than 3,000 miles of shoreline, it’s no surprise that Michigan is home to more lighthouses than any other state, and many lie within southwest Michigan. Walk the landscaped boardwalks to South Haven’s South Pierhead or to the Grand Haven Lighthouse, both brilliant red against the sand dunes and each with their historic catwalks still intact. St. Joseph’s white and red North Pier Lighthouse is especially beautiful in summer, when the Lake Michigan surf regularly coats the beacon in magnificent icicles.

Antique shops lie scattered along the Red Arrow Highway between St. Joseph and the Michigan state line. Whether you’re looking for a vintage hat, a Victorian floor lamp or decades-old advertising posters, you can find them at tiny shops like the Harbert Antique Mall, Lovell & Whyte, and Lakeside Antiques. For the antiquing mother lode, visit the Allegan Antiques Market. The warm-weather market features 400 indoor and outdoor dealers and ranks among one of the finest in the U.S.

10. Overnight in a Bed & Breakfast

Tuck under the covers at a cozy southwest Michigan B&B, where the duvets are thick, the breakfasts hearty and the dreams especially sweet. Southwest Michigan is home to a large selection of luxurious B&B inns, including the Wickwood Inn in Saugatuck, Yelton Manor and the Carriage House at the Harbor in South Haven and Rabbit Run Inn in Sawyer.

Ranking #5 in the nation for its number of breweries, Michigan promises travelers will never be far from a refreshing drink. That’s true in southwest Michigan, too. Wet your whistle at local favorites like New Holland Brewing in Holland; Founders Brewing in Grand Rapids; Saugatuck Brewing in Douglas; and Greenbush in Sawyer.

Scenic bike trails crisscross southwest Michigan, making it easy to explore this region’s natural beauty. Take your bicycle to the Kal-Haven Trail State Park, a 33-mile, linear multi-use trail that stretches from South Haven to Kalamazoo. Or cycle a portion of Michigan’s epic USBR-35, a designated 500-mile bicycle route that begins in New Buffalo and runs the entire length of the southwest Michigan shoreline and beyond to Sault Ste. Marie.

Unwind at These 15 Southwest Michigan Wineries This Season