Dive into Michigan Shipwrecks at these 12 Underwater Preserves

The Great Lakes were once America's busiest highways. Ships filled with lumber, coal, iron ore—and vacationers en route to lakeside resorts —crisscrossed the nation through these waterways. Unfortunately, the waters were as dangerous as they were busy, and often unpredictable storms and the resulting waves took down ships (and occasionally took lives). That shipwreck history is strikingly preserved within a dozen official shipwreck sanctuaries.

The bottomland of the Great Lakes is a time capsules of another era, with thousands of lost schooners, steamers and barges carefully preserved by the cold, fresh waters. They're also now preserved by the Michigan Underwater Preserve System, created by legislation in 1980 that preserves them for generations by making it a felony to remove portholes, anchors, even a fork from a wreck within. Some 2,300 square miles are preserved in 12 preserves, with many wrecks shallow enough to explore through snorkeling or glass-bottom boat tours that bring stories to life through on-board narration.

The first national marine sanctuary, Thunder Bay is the state's sanctuary gem with its more than 100 historic shipwrecks in or around Thunder Bay. Wrecks lie in water depths that range from a few inches to 200 feet, all well marked, making them perfect for diving beginners, experts, snorkelers and even those who catch the glass-bottom boat tours offered by Alpena Shipwreck Tours. The cruises offer glass-bottom viewing areas, offering a perfect option for non-divers, families with children and those who want to hear stories that add more depth to the experience.

Thunder Bay is both National Marine Sanctuary and Underwater Preserve, offering more protection and research surrounding “Shipwreck Alley” with its known wrecks dating from 1849 to 1966. Among the best are the Montana, a 235-sidewheel steamer that sunk after a fire and the wholly intact Pewabic—upright and largely intact but outside recreational limits at 148 to 168 feet. Most of her relics are displayed at the visit-worthy Heritage Center from which you can also often watch divers live on camera from within.

Grand Traverse Bay is strategically located, which means many ships have sailed through for commerce activities. Ships including the tall ships of the Traverse Tall Ship Company still sail in these pretty twin bays for recreational purposes, but there are also several lost ships from the lumber and early tourism heydays—making this a great destination for beginning diving—as well as tourism of every sort. Among the most prized wrecks is the Metropolis, a schooner that was lost in a snowstorm in 1886. Some of the debris is only in eight feet of water, but there are deeper portions in 120 feet of water. Another schooner, the Yuba is only in 15 feet of water, making it a viable option for beginning divers. A third option, out of many, is the A.J. Rogers, built in 1862 that sank in 1898 while attempting to reach Old Mission Point. This schooner is located 53 feet under water on the scenic peninsula notable for wineries, orchards and farm markets. Need a diving lesson or want to go with a group? Scuba North, a full-service diving center, offers several options for charters, group travel and training.

One of the richest areas in Michigan for shipwreck diving is the Manitou Passage Underwater Preserve which surrounds the Manitou Islands, part of the Sleeping Bear Dunes National Lakeshore. Many ships within this preserve were hard-working vessels during Michigan's lumber era. Many sought safety during storms in the lee of the islands, a plan that often worked, sometimes didn't. The Francisco Morazan was among the unfortunate. The ocean-going freighter was lost in a snowstorm on November 29, 1960. This 247-foot package freighter ran aground on rocks off the south end of South Manitou Island, its broken hull resting in shallow water a few hundred yards from the shore, offering easy access to the hull and debris for novices. The Three Brothers, which sunk in September 1911 off South Manitou, is in depths ranging from 5 to 45 feet, making much of it accessible as well. Head to the dunes visitor center for information on wrecks and many other beach, hike, paddle and other activity options within the national lakeshore.

The Keweenaw Peninsula along the south shore of Lake Superior has been called the “catcher's mitt” of lost ships. There are 12 official wrecks within this preserve along Michigan's Copper Country. Among those is the wreck of the U.S. Coast Guard Cutter Mesquite, which ran aground relatively recently—1989—while retrieving buoys. The pounding against a rocky shoal damaged the ship, and the Coast Guard cooperated in its intentional sinking as a dive site of a wreck with most equipment still on deck. Wrecks are not the only preserve treasure, though. Head to the roadside park, Esrey, between Copper Harbor and Eagle Harbor to see why. This is a popular shore dive spot for agates, copper and other mineral treasures. You're also on the route to Brockway Mountain Drive, one of the state's most popular scenic road trip destinations.

The loss of the Edmund Fitzgerald 17 miles north/northwest of Whitefish Point and popular Gordon Lightfoot song about the sinking has perhaps made this the most famous shipwreck preserve of all time. There are 30 wrecks within the official preserve, and the high number is no surprise given the way that virtually every ship traversing Lake Superior passes by the tip of this point. Heaving traffic and storms, both combined to give this preserve a long list of wreck sites, many of which still elude discovery and search efforts. Divers will find the Indiana, a wooden steamer that sunk in 1858 off Crisp Point.  Another favorite is the wooden schooner Niagara, 204 feet in length, and in 100 feet of water.  A bonus of a trip to this sanctuary is the chance to visit and learn from the Great Lakes Shipwreck Museum, home to the bell from the Fitzgerald and several valuable shipwreck artifacts. You can stay the night in the remodeled Coast Guard crew quarters on the point.

The narrow DeTour Passage channels ships bound from Lake Huron to the Soo Locks, and storms, heavy seas and navigation errors have throughout history led to losses of ships here. Most of the 19 wrecks officially part of this sanctuary rest in shallow waters accessible to divers. Shore accessible sites are frequent here. A portion of the Sainte Marie can be seen above the water, a steel paddlewheel nearby, and divers can explore remains of abandoned ships and relics by the Detour Village Municipal Marina. Favorite dive sites include the John B. Merrill, a schooner built in 1873 and known for its fast sailing as well as large cargo capacity. She sunk while carrying a load of coal in October 1893 and ran up on a shoal. Though broken, she showcases graceful lines and her original name board, ship hardware and personal effects. This lies in between 35 and 85 feet of water.

Just as a thumb juts out on the hand, so does Michigan's, and many vessels traveling on Lake Huron pass nearby and find it hard to reach shelter from the lake's frequent storms. Some 22 major shipwrecks lie in this underwater preserve, and new wrecks are discovered every year. Among the best wrecks for diving are the schooner Dunderburg, which sank in August 1868 and lies fully intact in 155 feet of water. A highlight is the figurehead that adorns the bow and cargo of grain in the holds. A bonus of exploration in this mostly rural resort area is the limestone ledges, walls and sunken island located along the Port Austin reef near the lighthouse. There are many state parks great for an exploration base.

What lies above the water surface tends to be the biggest draw to the Pictured Rocks National Lakeshore. The shipwrecks, sea caves and underwater interpretive trails are as fascinating as the mineral stained rocky ledges that attract tens of thousands of tourists annually. The entirety of the national lakeshore lies within the Alger Underwater Preserve as does Grand Island. Among the best is the Smith Moore, which rests in 70- to 105 feet of water and the Bermuda, popular with sport divers and snorkelers because the old wooden schooner that sank in 1870 is only 12 feet from the surface. Sea caves are another diving draw—caves formed by wave action that hollowed out sandstone cliffs under the water and at water level down to 10 feet offer great snorkeling and photography attractions. Take the two-hour Glass Bottom Shipwreck Tour and get a two-attractions-in-one trip with stories behind some of the most interesting wrecks as you glide over top of the wreckage and a tour of the Pictured Rocks above.

Traverse the five-mile long Mackinac Bridge and glance down to the generally turbulent waters, and you see quickly why the Straits have a well-deserved reputation as a dangerous area to navigate. Lake Michigan and Huron meet directly under the bridge, and the narrow Straits magnify wind and waves, Adding to the challenge is the abundance of rocky shoals and shallows. The Cedarville lies on the lake floor in this preserve; the third largest freighter lost on the Great Lakes, it sunk in 1965 when it collided in the fog with an ocean-going Norwegian freighter. Ten men died in the wreck, which lies in 105 feet of water. Experts also head here to explore the hold of the mostly intact Eber Ward which sunk in 1909. During dive season, the Straits of Mackinac Shipwreck Preserve Association places buoys on the major dive sites in the region. This is also an active tourist destination—you'll find Upper Peninsula favorites like whitefish and pasties as well as many popular shops and iconic Mackinac Island. Mackinac State Historic Parks also run a first-rate shipwreck museum at the Old Mackinac Point Lighthouse.

Just south of the thumb lies the Sanilac Shores Underwater Preserve, stretching from near Lexington to Forestville—a treacherous stretch for early navigators because of the lack of safe harbor options in rough seas. There are at least 16 shipwrecks lying within 120 feet of the surface, making this preserve popular with divers with at least moderate abilities. Visit Sport, the first steel tug on the Great Lakes, and explore the many relics and tools scattered throughout the site. Regina, discovered in 1986, is another popular dive. Round out the trip with other maritime fun including the Sanilac Petroglyphs Historic State Park and the Lake Huron Shipwreck Museum. Prefer going with a guide? Rec and Tec Dive Charters are a good option for helping to locate and reach the many wrecks.

Some 14 wrecks are available in the newest state preserve. There are 345 square miles of Lake Michigan bottomland within the West Michigan Underwater Preserve stretching between Ludington and Grand Haven and including popular tourist towns of Whitehall, Pentwater and Muskegon. Experts love diving Ironsides, which was supposed to be as sturdy as it sounds. Built in 1864 to haul iron ore during the Civil War, she sunk in 1873 near Grand Haven in 120 feet of water, and the engines an hull offer an interesting dive. Collections above ground are worthy too. Find the WWII submarine Silversides at the USS Silversides Submarine Museum in Muskegon and celebrate maritime history at annual events like the Grand Haven Coast Guard Festival.

The Southwest Michigan Underwater Preserve offers the chance to dive wrecks like the Havana, a schooner that sunk in 1887. The hull, keelson, centerboard and more are visible to divers, offering great viewing of early ship construction. Another draw is the wreck of the Rockaway, lost in a storm in 1891 while it was sailing from Ludington to Benton Harbor. Want to know more of the story behind it? Head to the Michigan Maritime Museum in South Haven for information on this and other wrecks. Schedule diving tours through Shipwreck Explorers, which specializes in exploration of wrecks like the Hennepin, S.S. Michigan, Hamilton, and H.C. Ackley. 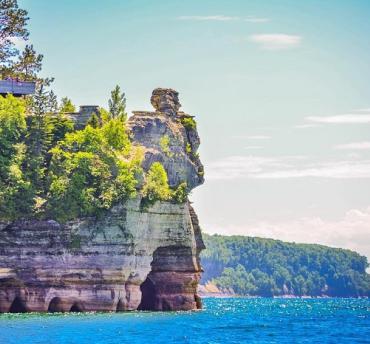