20+ Things to Do in Michigan: Your Ultimate Fall Bucket List

When fall rolls around, Pure Michigan dresses itself in the boldest colors. Hardwood forests grow brilliant with reds and yellows. 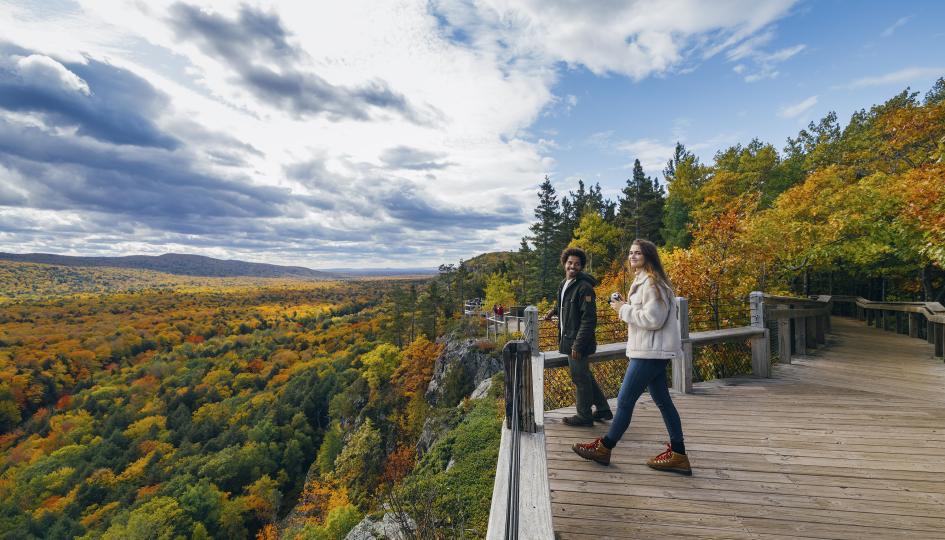 The low-slanting rays of the sun turn the Great Lakes a deep turquoise blue. U-pick farms and vineyards explode with the ripe flavors of fall, and Michigan’s cities celebrate the season with fall festivals. Check out this bucket list and make the most of autumn in Michigan.

Michigan’s beautiful hiking trails grow even more beautiful in the fall, when trees blaze with color. Visit the Porcupine Mountains Wilderness State Park in the U.P. to see the brilliant foliage against a backdrop of Lake Superior and the Lake of the Clouds. Or head to the Sleeping Bear Dunes National Lakeshore to combine your autumn hike with a breathtaking run down the dunes.

Autumn’s sunshine brings apple season to Michigan. Head to Robinette’s Apple Haus & Winery in Grand Rapids for fresh-picked bushels of Macintosh and Delicious and stay for sweet-tart cider and warm donuts. Your family can pick their own fruit at Crane Orchards U-Pick and Corn Maze in Fennville, each tidy row of apple trees labeled to help you find the perfect variety for pie baking.

Sip a glass of cider at Rochester Hills’ Yates Cider Mill and you’ll be following a tradition that stretches back to Civil War days—Yates has produced cider from its water-powered mill since 1863. The name is funny, but the cider-sipping is good at Knaebe’s Apple Farm & Ciderworks in Rogers City. Looking for something a little stronger? Vander Mill Cider Mill & Winery in Spring Lake promises soft and hard ciders made solely from locally-grown apples, or jazzed up with ginger, berries, hops or poblano peppers.

Autumn brings the crush to Michigan’s 100+ wineries. Sample the state’s crisp Pinot Grigios, fruity Rieslings and dry Pinot Noirs at one of the state’s wine trails: The Leelanau Peninsula Wine Trail and Wineries of Old Mission Peninsula Trails near Traverse City; the Bay View Wine Trail in the Petoskey Area; and the Lake Michigan Shore Wine Trail in southwest Michigan.

With the nickname “Michigan’s Little Bavaria,” it’s no surprise that Frankenmuth celebrates Oktoberfest like no place else in the state. Enjoy live polka music and dancing, traditional German food, wiener dog races and a glass of beer from Frankenmuth Brewery.

Life slows down on Michigan’s pristine rivers, and never more so than with a fly rod in your hands. Try your hand at landing a salmon, steelhead or trout at one of the state’s best fly fishing rivers: the Pere Marquette near Baldwin; the Manistee River; St. Mary’s River near Sault Ste. Marie; or the Grand River near Grand Rapids.

The air grows crisp. The leaves turn color. And the rivalries come to life on Michigan’s Big Ten football fields. Whatever team you root for, the Michigan State Spartans in East Lansing or the University of Michigan Wolverines in Ann Arbor, you can count on an exciting sports showdown.

Check into a cozy Michigan inn, and wile away the hours on colorful forest walks or before a roaring fire. Relax at the turn-of-the-century Laurium Manor Inn on the Keweenaw Peninsula, once the elaborate mansion of a copper mine owner. The 100-year-old Walloon Lake Inn sits on the sparkling shore of its namesake lake and just a short drive from the golf courses and shopping in Petoskey. Or visit the National House Inn, Michigan’s oldest. Set in the heart of Marshall, the inn was built in 1835 and once served as a stagecoach inn and a stop along the Underground Railroad.

Each September, some 50 mural artists visit Detroit’s Eastern Market, brushes in hand, with the goal of brightening otherwise bare warehouse buildings. The annual festival called Murals in the Market brings contemporary art to Michigan’s oldest farmers market and also allows visitors an opportunity to observe and chat with some of the world’s best muralists.

Fall marks the opening of a new season for the NHL Red Wings and the NBA Detroit Pistons, and since 2017 both teams have called Midtown Detroit’s new Little Caesars Arena their home. Make a day of it, with an arena tour before the game and dinner at Mike’s Pizza Bar or Kid Rock’s Made in Detroit restaurant, both inside the arena.

Hop on your bicycle, rev your motorcycle or pack the kids in the car. Autumn is the perfect time for a scenic drive. Enjoy the beauty of the Lake Michigan shore along M-22, perhaps Michigan’s most famous scenic drive, with glimpses of the sparkling lake peeking through the brilliant foliage all along the Leelanau Peninsula shoreline. The U.P’s colors peak long before those in the Lower Peninsula, so don’t put off a trip along the Keweenaw Peninsula’s M-26. The route passes through the Copper Country State Forest en route to Houghton and Calumet beneath a canopy of stunning autumn color. Make time for a drive up Brockway Mountain in Copper Harbor for spectacular views that seem to go on forever.

12. Gear Up for a Hunting Trip

Michigan’s traditional hunting season for deer, turkey, waterfowl and other game, fall signals the opportunity for outdoor enthusiasts to head into the woods. The western U.P. near Ontonagon is a prime location for grouse, while good pheasant hunting can be had in Michigan’s thumb, near Saginaw. Looking to bag a big buck? Head to the northern Lower Peninsula near Gladwin for prime whitetail deer hunting.

One of the nation’s premier art festivals, ArtPrize fills Grand Rapids’ public parks, waterways and streets—and more than a few hotel and restaurant lobbies—with memorable art. Stroll through the city admiring the variety of artworks, from paintings to kinetic sculpture, from fiber arts to photography, and vote for your favorite via smartphone app.

14. Lose Yourself in a Corn Maze

Kids and adults love the challenge of finding their way through intricate labyrinths carved out of towering cornfields. Bestmaze in Williamston combines a 20-acre corn maze with laser tag. Crane Orchards U-Pick and Corn Maze in Fennville promises a 20-acre corn maze in west Michigan, while Alber’s Orchard & Cider Mill boasts a 7-acre corn maze and a smaller straw bale maze on their farm in Manchester, in southeast Michigan.

Michigan’s pumpkin patches buzz with activity in the fall, when shoppers scout their fields for the biggest, fattest, roundest—or oddest—pumpkins. Gene the Pumpkin Man dresses in orange head-to-toe to sell hundreds of pumpkins, gourds and Indian corn in Kalamazoo.

Fall marks the beginning of the cultural season, the time of year when Michigan’s top theatres, symphonies and ballet companies open their season. In Detroit, the Detroit Symphony Orchestra ranks as one of the nation’s oldest orchestras, performing from their home at Detroit’s Max M. and Marjorie S. Fisher Center, and the Michigan Opera Theatre, the state’s premier opera company, performs at the Detroit Opera House. On the other side of the state, the Grand Rapids Symphony performs from fall through spring at Grand Rapids’ DeVos Performance Hall while the Grand Rapids Ballet Company, Michigan’s only professional ballet company, performs in the Peter Martin Wege Theatre.

Summer may be behind us, but the wealth of Michigan’s farms doesn’t end until the snow flies. Since 1841 Eastern Market has been a Detroit staple, covering six city blocks with stalls of root vegetables, fall-blooming flowers and locally-made pierogis and sausages in autumn. Ann Arbor’s Kerrytown Market & Shops and its surrounding streets feature vendors offering locally-sourced produce, cheese and meats year-round. And the Flint Farmers’ Market features more than 50 vendors selling local produce, meat and poultry, cheese and bread indoors year-round.

If you like northern Michigan’s wineries, why leave? Linger for an evening—or longer—at one of the state’s finest. Traverse City’s Chateau Chantal’s cozy, art-themed rooms include access to the tasting room on the honor system after the crowds have gone home. On nearby Old Mission Peninsula, the Inn at Chateau Grand Traverse overlooks acres of tiny vineyards and includes a bottle of wine with each night’s stay. And just across the water in Suttons Bay, Black Star Farms offers a private evening wine reception and a sumptuous breakfast for overnight guests.

21. Enjoy Deals During the Off-Season

As the temperatures drop, so do the crowds at many of Michigan’s prime attractions. Take advantage of the lingering sunshine and the quiet and head to the state’s hot spots off-season. Visit Mackinac Island in the fall, when ferry boats aren’t quite so full and room rates at the Grand Hotel and Mission Point Resort drop. The beaches and downtown shops in Holland grow quieter in autumn, too, even as they remain sunny and inviting. And national parks such as Munising’s Pictured Rocks National Lakeshore promise hiking trails and Great Lakes-washed beaches all to yourself. 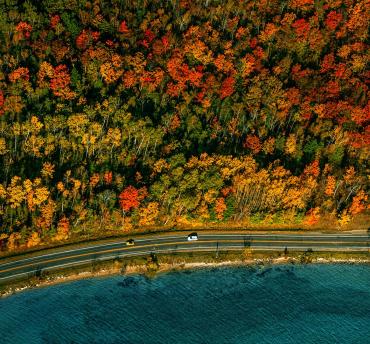 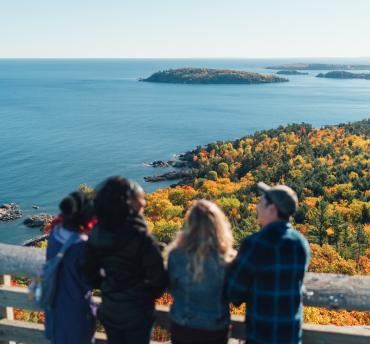 6 Scenic Stops for Fall Color in the Upper Peninsula 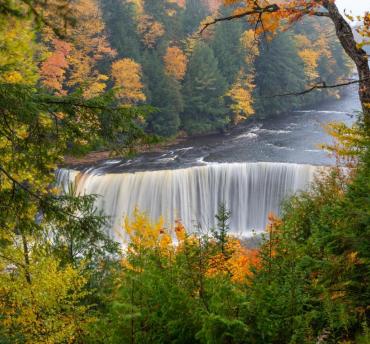 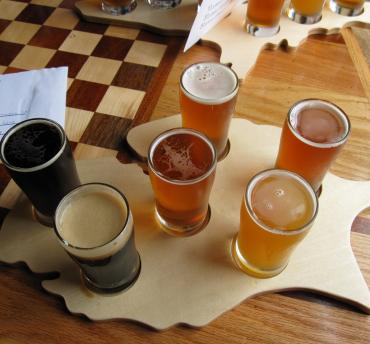 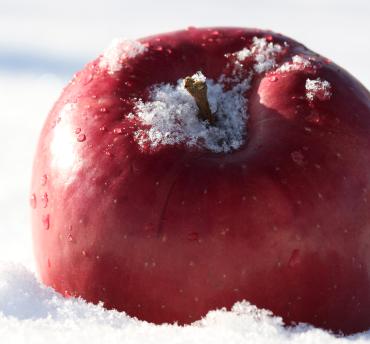